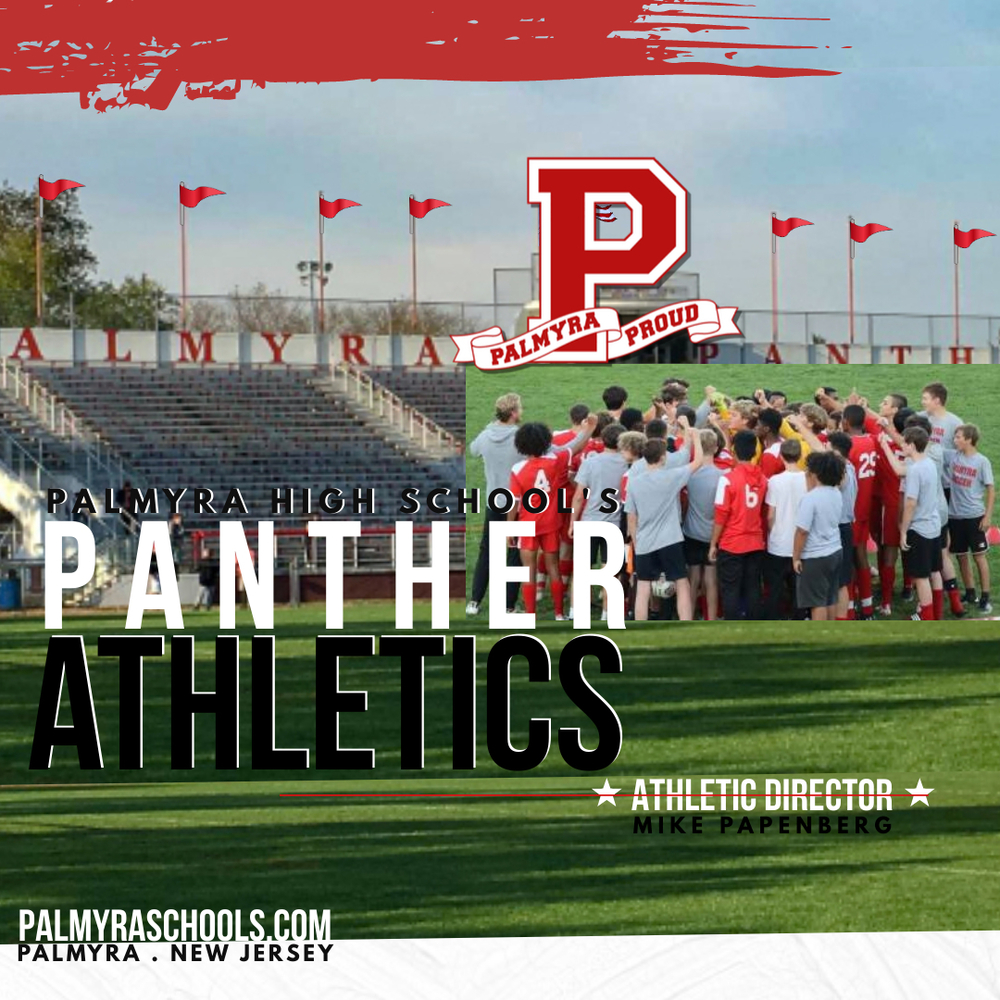 Good Afternoon Palmyra!  We are crossing the midway point for our Fall athletic teams.  If you haven’t had a chance come out and watch an event this week.  Click here for the schedule to catch our athletes in action.

The Girls Soccer Team continued their hot start to the season with a 2-0 week.  The girls started off the week with a 5-1 win over Pennsauken High School.  Elizabeth McCarron led the Lady Panther’s attack with a hat trick.  Lauren Gilmore & Ashley Vernot each added goals for the girls as well.  Caitlin Hartman made 5 saves in goal to earn the victory.  On Wednesday the girls defeated Riverside High School 8-0.  This time it was Julia Ostroff with the hat trick to lead the attack.  Lauren Gilmore added 2 goals, while Sierra Morrison, Jada McCloskey and Kaylee Shaw each added single scores.  Caitlin Hartman made 4 saves in goal to pick up the shutout win.  The Girls enter play this week with a 9-2 record.

The Boys Soccer Team had a 2-1 week.  On Monday, the boys suffered their 1st division loss with a 4-3 overtime defeat at Florence High School.  The boys rebounded with a 2-0 Senior Night win over Willingboro High School on Wednesday.  Chris McCarron & Reed Wells were the goal-scorers for the Panthers while Matteo Gravano had both assists.  Senior David Ward made 4 saves to earn the shutout for the boys.  On Friday the boys defeated Freedom Division foes Maple Shade High School, 4-0.  Chris McCarron & Jase Jennings led the way offensively, each scoring twice.  John Liebe made 1 save in goal while David Ward made 3 to pick up the boys 8th shutout in 11 games this season.  The boys improved their record to 9-2 and  travel to New Egypt High School this week for a BCSL Freedom Division game.

The Football Team travelled to Woodbury High School Friday night.  The Panthers were unfortunately on the wrong side of the 57-8 score line against undefeated Woodbury.  Our next game is at home under the lights at Matt Curtis Stadium this Friday at 7pm against Gloucester City.

The Girls Tennis Team had a 2-1 week.  The girls opened up the week with a 5-0 win over Willingboro High School.  Naomi Caban won at 1st singles (6-3, 6-3) & Erika Sarmiento won at 2nd singles (6-1, 6-1).  The girls travelled to Middle Township for their 1st round NJSIAA playoff match-up.  Unfortunately the girls were unable to pick up the playoff win losing 5-0.  The Lady Panthers finished off the week with a win over Holy Cross High School on Friday, 4-1.  Naomi Caban won at 1st singles (6-3, 6-1) & Kiyomi Okazaki won at 2ndsingles (6-1, 1-6, 10-6).  Olivia Ottenbreit/Natalie Belton won at 1st doubles & Shea O’Connell/Fiona Hennigan won at 2nd doubles.  The girls are now 4-5 on the season.

HOMECOMING IS JUST 10 DAYS AWAY! ALUMNI & friends, c'mon out on Saturday October 16th!

Here is a link to our schedule to come check out our games this week and beyond. #GOPANTHERS! for more schedules & other information find us on PalmyraSchools.com